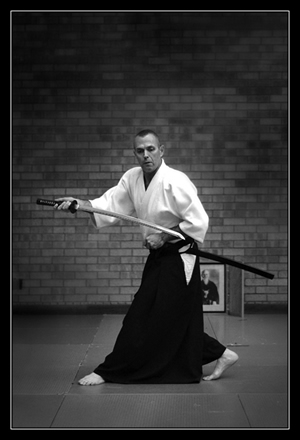 Iaido  (The Way of Sword Drawing) traces its origins to the late 16th century in Japan. It was developed by Hayashizaki Shigenobu. Though an established fact that some Iai-jutsu was practiced within other schools prior to Hayashizaki’s birth, he is credited with the creation of the system of Iai which we know today as Muso Shinden Ryu., which was actually developed based on a vision that Hayashizaki received in a dream, and which he referred to as Batto-Ho. The traditions and forms of Muso Shinden Ryu were transmitted through successive generations of swordsmen, amoung them Nakayama Hakudo Sensei, commonly recognized as one of the two foremost martial artists of the Meiji Era (O’Sensei being the other). One of Nakayama Sensei’s foremost students, Mitsuzuka Takeshi Sensei, established himself in Tokyo and continued the teachings of the Muso Shinden Ryu as transmitted to him by Nakayama Sensei.

Iaido is practiced using a live or practice Japanese sword. Through Iaido training we attempt to understand the use of the weapon while simultaneously stimulating and stretching our body.

Weapons training is held on Thursday evenings. During weapons class we primarily utilize the wooden sword (bokken), and the staff (jo), and sometimes knife (tanto) and short sword (wakazashi).

Through the study of basic forms and partner practice we attempt to further understand the art of Aikido and particularly the study of timing and distance.