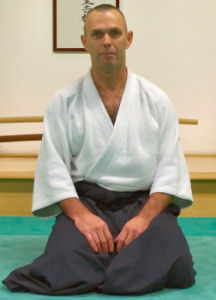 Michael Flynn Shihan began his study of Aikido in 1982 at San Diego Aikikai under the direction of Shihan TK Chiba. He was promoted to Nidan in 1984 and was named Fukushidoin that same year.

In 1985, Flynn travelled to Japan, where he studied Aikido at Hombu Dojo and Muso Shinden Ryu Iai-do with Mitsuzuka Takeshi Sensei.

He returned from Japan in 1987 and served as the Chief Kenshusei at Berkeley Aikikai until December 1990, at which time he was promoted to Yondan and named Shidoin.

Flynn Sensei established Alameda Aikikai in January 1991 which eventually grew to become a major Birankai anchor in Northern California. He served as a member of the Teaching Committee, USAF Western Region, Chairman of the Sub-teaching committee, and member of the Iai Batto-Ho teaching committee until relocating to Scotland in June of 2005.

He was named Shihan in June of 2005 and was awarded 7th Dan by Doshu Ueshiba Moriteru on 14 January 2018 during the Kagami Baraki celebration at Hombu Dojo. He has also received Iaido Shihan title from Mitsuzuka Sensei.

Since arriving in Scotland, Flynn Sensei has established the Thistle Aikikai. He has served as the Chairman of the British Birankai.

He has  also served as the Technical Director of both Hellenic Birankai and Birankai Portugal.

He is married to Julie, and the proud father of 3 children, Mitsu, Michael, and Nicole.